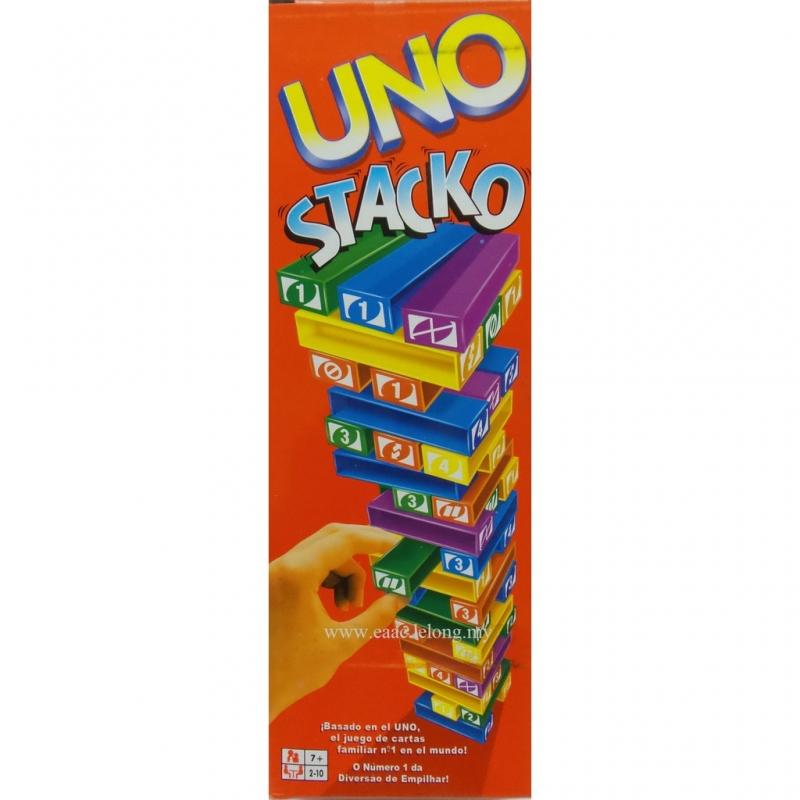 Pull the blocks that match the color or number of the last one pulled and restack on top.
Or pull a COMMAND block, and make the next player follow the command! But don’t make the tower fall, or you lose!

Set Up:
Choose the player that will go first, this player must build the tower.
On the flat surface, randomly stack layers of 3 blocks at the right angle to the layer below it, as shown on the box. Use the loading tray to straighten the layer below position.
The loading tray can be used to reload blocks into the box for re-storage. At the start of a round, play passes to the left.

How to Play:
The first player selects a block and pulls it out from the tower.
If a NUMBER block is pulled, the next player must draw a block of either the same number or color as shown on the pulled cube

(or a WILD-see below).
A block can only be drawn from the levels below the highest completed level of the tower.

Stack the pulled block on top of the tower at a right angle to the level beneath.
You must complete a 3 block level before start another one.

REVERSE block:
If a reverse block is pulled, play continues in the opposite direction of current play (Pass left become pass right and vice versa)

Play continues in the new direction until another REVERSE is pulled.

This player must pull a block that matched the color of the pulled SKIP block.

Then the next player has to draw a block that matched the color of the second DRAW TWO block.

WILD block:
If as WILD block is pulled, the player who pulled the WILD block, select a color and announces it to the next player.
The next player then has to pull a block that matched this color.
A WILD block can be pulled in place of any block, at any time, except during DRAW TWO punishment.

Additional rules:
· Whenever a block is pulled, only one hand can be used, but you may switch at any time during your turn.
· You can touch any block to find a loose block but you must restore the block to its oribinal position (using one hand only) before
touching another block. The tower can be straightened out whenever a player thinks it is necessary as long as one hand is used.

· You turn is over as soon as you let go of the block you are replacing on the top.

· Yelling “PILE UP”: if a player used 2 hands to pull a block or straighten the tower, ano