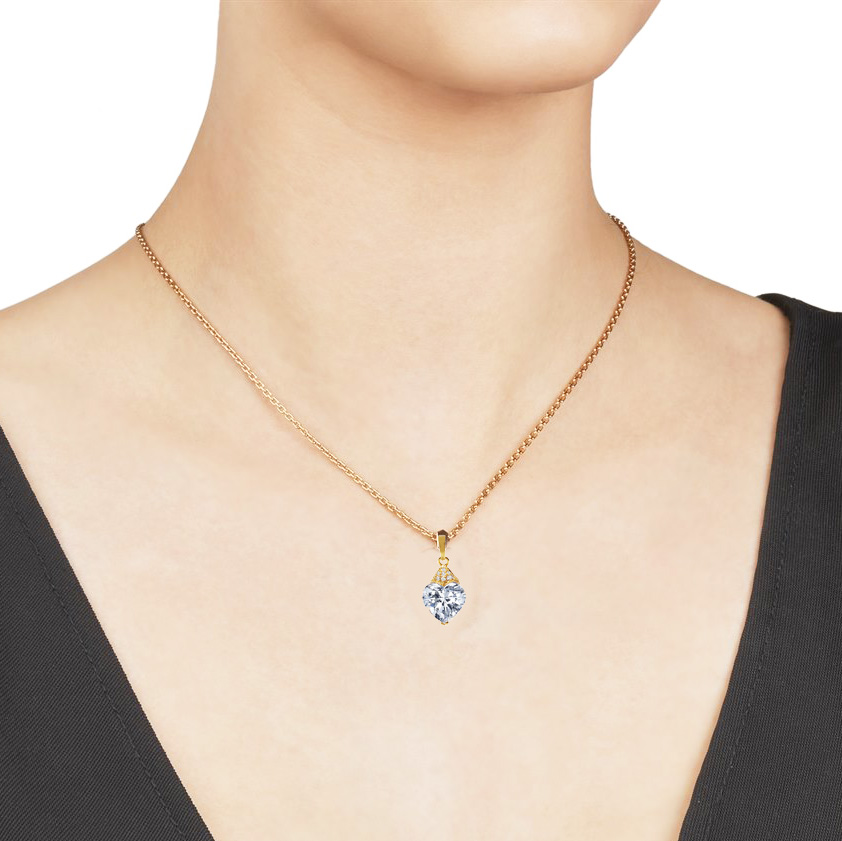 White is an elegant color that matches any other, and white gems, whether as pendants or beads, give your overall look the desirable glints and highlights such as only the color white can give.

Traditionally, a birthstone is associated with each month of the year. For example, the birthstone for January is a garnet, while lucky babies born in April get a diamond as their birthstone.

The origin of birthstones is believed to date back to the breastplate of Aaron which contained twelve gemstones representing the twelve tribes of Israel. The current list dates back to 1912 with only one addition since then the tanzanite was added to December.

There are numerous legends and myths aboutbirthstone healing powersand their therapeutic influence. According to these legends, wearing a gemstone during its assigned month heightened its healing powers. For the full effect, individuals needed to own all twelve and alternate them monthly.

There are many variations of birthstones and associated birthstone colors the origin of birth stones dates back to early civilizations. Many believe that wearing a gemstone of a specified month provided healing powers. Using these birthday stones in the assigned months was to provide spiritual healing and keep away evil spirits. In the early twentieth century, 1912 to be exact, the modern list of month stones was adopted, but has been modified in 1952 and most recently in October of 2002. Below is some brief history on birthday gemstone colors and respective features. For those lucky ones born in the month of January, usually filled with snow and post Christmas celebrations,your birthstone is Garnet. This stone comes in a variety of colors ranging from pink to black. Most common of this birthstone color is reddish brown. The word garnet means grain or seed. That is why one glance at the deep red seeds of a pomegranate reminds of this amazingly beautiful stone. This stone; however, is not one you can chew on if you love your teeth as it is very hard and is used in grinding applications. It is believed to keep away any nightmares which might disturb you and guide the user through dark times. Keep it really close and youll have a blissful life. The beautiful purple colored Amethyst is the right kind ofgemstone color for the month of love and blooming hearts February. Ancient Greeks are known to use this stone for protection against intoxication. This stone has an intense violet to purple hue. Purple is a color which was associated with royalty in olden times hence was often used in the jewelry and garments worn by royals. It was once considered more expensive and precious than diamonds. For those who are not familiar with this gorgeous stone amethyst brings peace and tranquility and also provide protection to its bearer. It is known to strengthen the bond of love between two people. Thebirthstone of March is Aquamarine. The stone gives such coolness to the eyes because of its beautiful blue tones which are calming. The stone gets its namesake from the color it bears. Its the color of the sea hence it is primarily believed to protect those at sea. The common association of Aquamarine with water led people in ancient times to believe that the healing power of the stone works best when immersed in water. It was used to heal illness of liver, stomach and mouth. It represents hope, love, and friendship and also encourages making new friends and relationships. Bloodstone is an alternate birthstone for March. It is a dark green stone flecked with red spots. The name is taken from the common legend of the stone attaining this red color from the blood of Jesus Christ spilling onto green jasper during the famous crucifixion. You have to be familiar with the birthstone of April knowing it is every girls best friend. Yes, thebirthstone for the month of April is diamond. Famously known saying that diamonds are forever this stone represents strength and because of its beautiful sparkle known to be pure. Diamonds are most often is colorless, but depending on the type of impurities the stone contains can come in all range of colors from yellow to orange, pink to blue. Diamonds have been treasured for thousands of years from some of their earliest uses with religious icons. Therich green of emeraldis perfect to be the birthstone color for the month of May. It symbolizes health and along with various healing abilities is known to provide insight into the future. Emerald is also thought to bring wisdom to people. It is also associated with fertility and rebirth of spiritual meaning throughout the different ages. June has thehonor to have the birthday stone of pearlmost commonly, but also alexandrite. Pearls, or moon stones, were thought to be tears of joy from the Gods in years past, and the favorite of Cleopatra. They are mainly associated with purity and passion. They actually come in a variety of colors from gold, green, blue to black. Alexandrite is named after Alexander II of Russia and is known to change colors and bring luck as well luck for the wearer. The amazinglybeautiful ruby is for the month of Julybirth stone. The sheer elegance of the stone describes its beauty and is believed to be popular for harmony and protection. The word ruby is derived from the Latin word ruber meaning red. It was once believed that if a ruby is tossed into a pot containing water it would instantly boil up. Magical powers are associated with this stone throughout the stages, probably due the common blood red color, but also found in brown, pink and purplish tones. Thevibrancy of lime colored Peridotwhich is the birthstone of August will take your breath away. This birthday stone color is believed to ward off night evil with its shine. This stone is always connected with nature. Its an Arabic word meaning gem. Because of its dazzling color it is also called gem of the sun, but can be found in a range of colors from dark olive to bright yellow. The amazingly beautifulblue colored Sapphire is the birthstone of September. It is often used for engagement rings and rightly so as it represents faith and purity. Because of its association with purity and heavenly grace it is also commonly favored by priests and churches from the earliest Christian times. Prince William recently bought her beloved wife a beautiful sapphire ring showing his faith in their relationship. Sapphires come in a variety of colors including pink, yellow, or even white. How can one assign a color to opals which are commonly known as thegemstone for October. The name alone means to see a change in color and this is certainly the case with opals that shimmer and show different colors in different light and angles. It is believed opal will bring happiness and healing to all. An alternate is the pink Cubic Zirconia for the month of October. Much less expensive when compared to diamonds, it is believed to provide a hint of love and romance. Topaz is linked with strength and facilitates healing. It comes in an array of colors including green, red, gold and pink. Citrine is analternate birthstone for November. Citrine originates from a word meaning lemon and often thought to help with digestion and removal of toxins. In ancient times, it was often worn in a talisman to protect themselves against evil thoughts and also snake venom. Blue topaz is the birthstone for December, and depending on the impurities can even be pink or yellow. The word has Arabic roots and helps the bearer stay clear sighted and focused. An alternate birth stone for December is the Turquoise which is a difficult gem stone to assign any other color label, but its namesake. Those who wear this gem stone are said to experience happiness and good fortune.