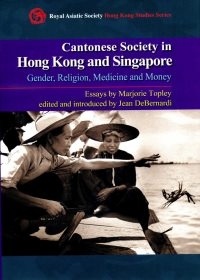 The volume collects the published articles of Dr. Marjorie Topley, who was a pioneer in the field of social anthropology in the postwar period and also the first president of the revived Hong Kong Branch of the Royal Asiatic Society. Her ethnographic research in Singapore and Hong Kong set a high standard for urban anthropology, and helped creating the fields of religious studies, migration studies, gender studies, and medical anthropology, focusing on topics that remain current and important in the disciplines. The essays in this collection showcase Dr. Topley's groundbreaking contributions in several areas of scholarship. These include "Chinese Women's Vegetarian Houses in Singapore" (1954) and "The Great Way of Former Heaven: A Group of Chinese Secret Religious Sects" (1963), both important research on the study of subcultural groups in a complex urban society; "Marriage Resistance in Rural Kwangtung" (1978), now a classic in Chinese anthropology and women's studies; her widely known and cited article, "Cosmic Antagonisms: A Mother-Child Syndrome" (1974), which investigates widely shared everyday practices and cosmological explanations that Cantonese mothers invoked when they encountered difficulties in child-rearing; and "Capital, Saving and Credit among Indigenous Rice Farmers and Immigrant Vegetable Farmers in Hong Kong's New Territories" (2004 [1964]).

Dr. Marjorie Topley is a cultural anthropologist trained at the London School of Economics. She moved to Singapore with her husband, Kenneth, in the early 1950s and was hired as the curator of anthropology at the Raffles Museum in 1951. In 1955 the Topleys moved to Hong Kong and in 1958 Dr. Topley received her PhD from the London School of Economics for her research on the organization and social function of Chinese women's vegetarian halls in Singapore. Dr. Topley published her first articles on Chinese religion in Singapore in 1951 in the Journal of the Malayan Branch of the Royal Asiatic Society and until her return to England in 1983, she conducted path-breaking research in both Singapore and Hong Kong, participated in international conferences and published extensively in the fields of Chinese medical anthropology, anthropology of religion, migration studies, and gender studies.One of the pillars of Dr. Topley's intellectual life and contribution in Hong Kong undoubtedly was her involvement in the Hong Kong Branch of the Royal Asiatic Society. She played a major role in the revival of the society in 1959 and helped create a vibrant organization that forms a bridge between scholarly researchers and a wider public including policymakers and members of the city's business community. Dr. Topley served as the branch's vice-president from 1966 to 1972 and as its president from 1972 to 1983.  Dr. Marjorie Topley passed away in December 2010 at her home in England.Jean DeBernardi is a professor of anthropology at the University of Alberta, Canada. Her areas of specialization include Chinese in Southeast Asia; the anthropology of religion; and ethnicity, nationalism, and transnationalism. She has conducted extensive ethnographic research on Chinese popular religion in Malaysia and Singapore, and her publications include Rites of Belonging: Memory, Modernity and Identity in a Malaysian Chinese Community (2004) and The Way that Lives in the Heart: Chinese Popular Religion and Spirit Mediums in Penang, Malaysia (2006).