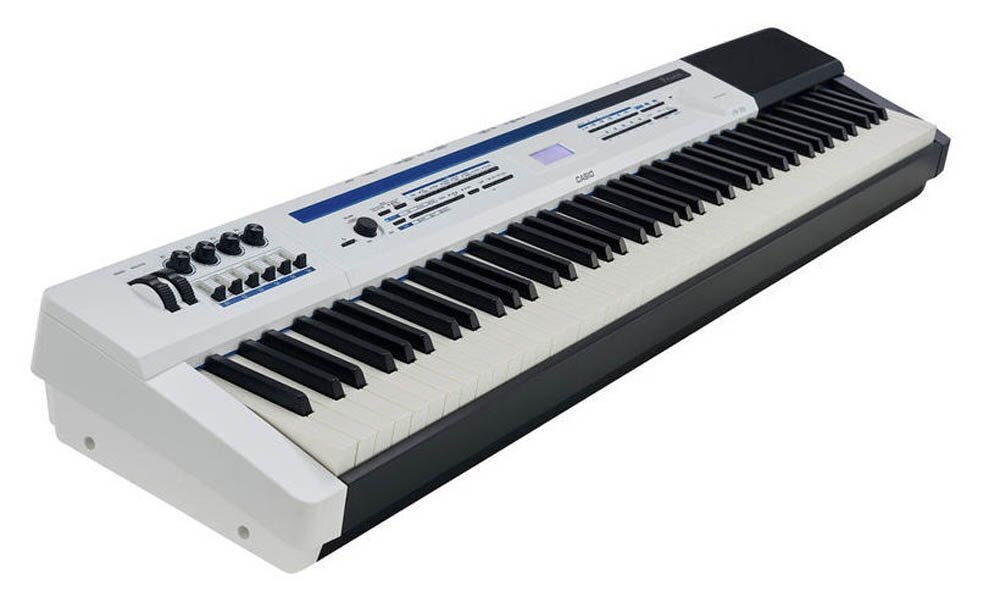 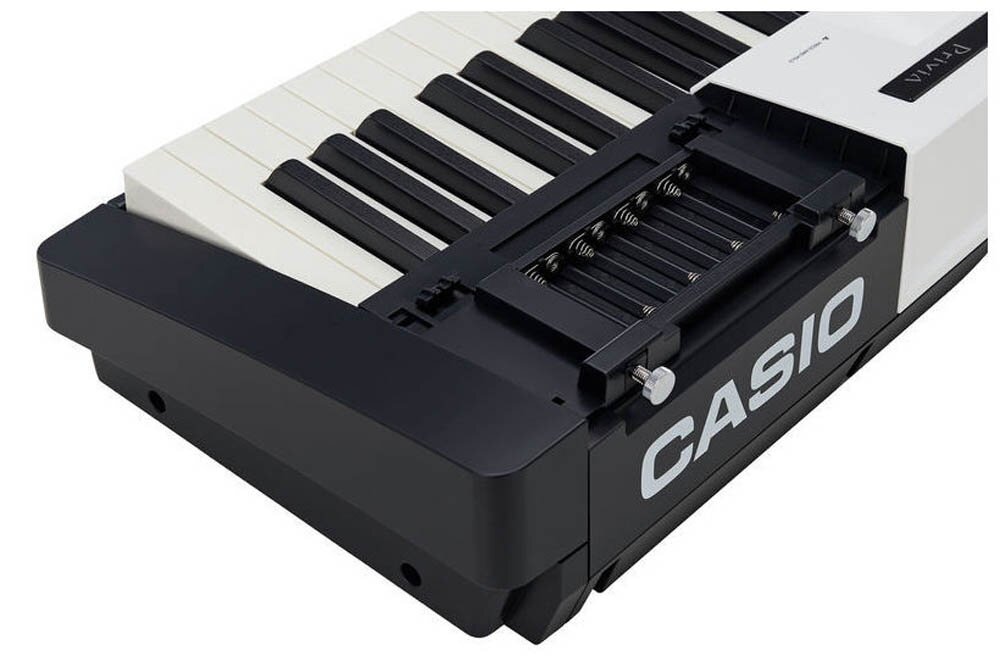 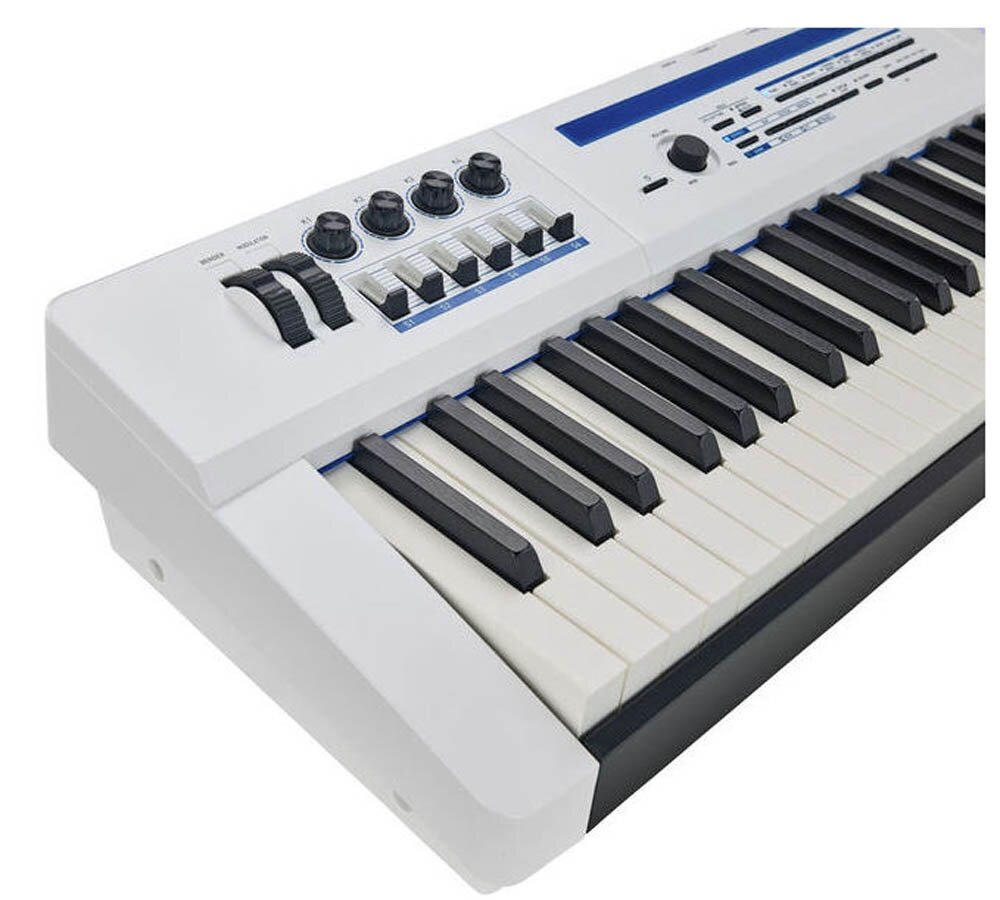 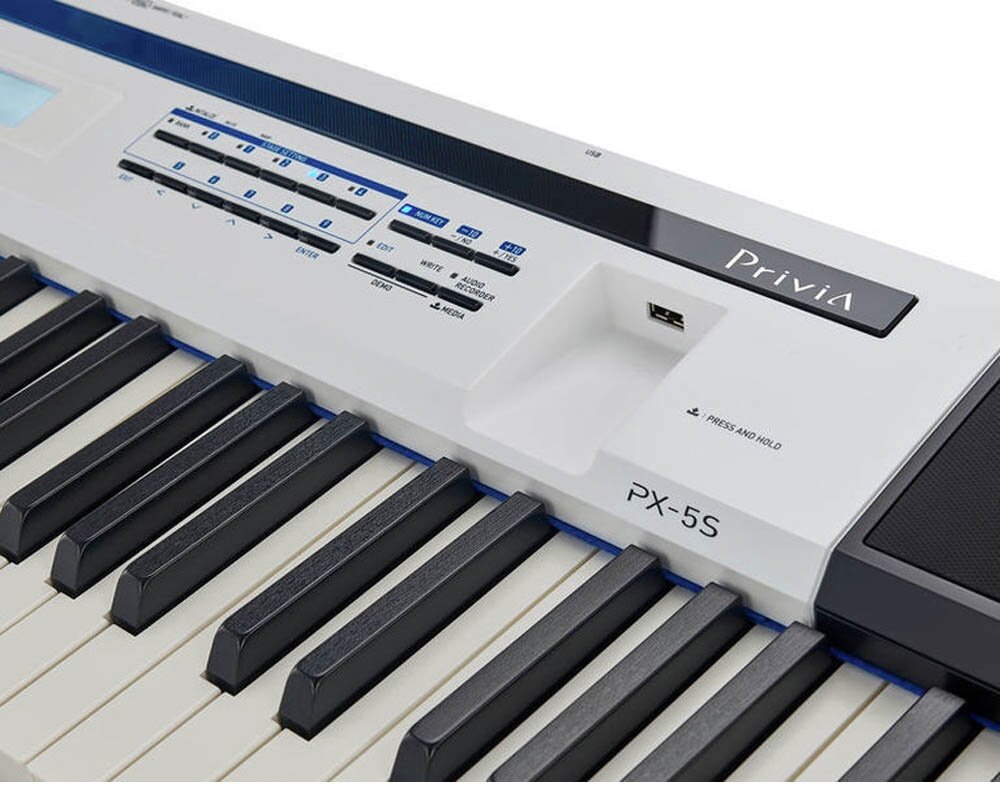 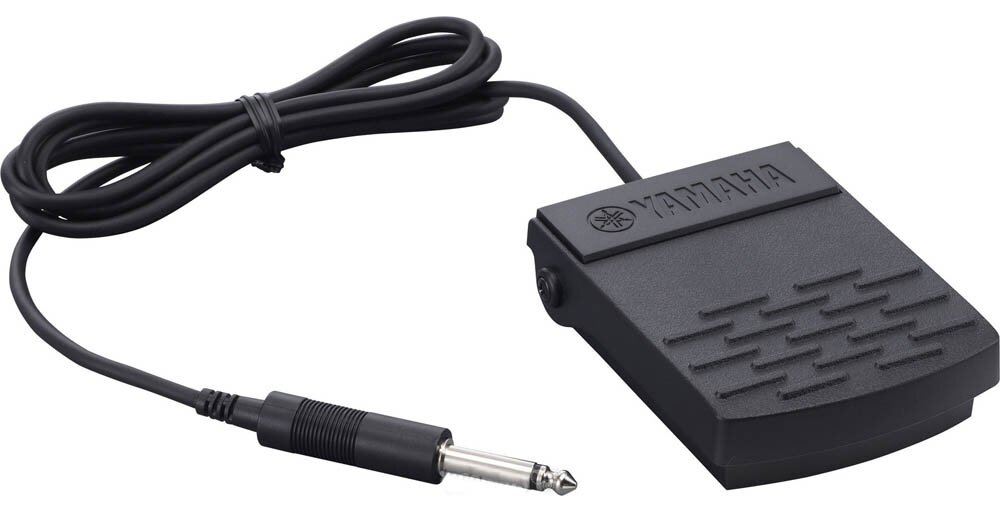 At the heart of the PX-5S Stage Piano is Casios proprietary AiR sound source which provides incredible realism, detail and expression for grand piano sounds. In the PX-5S, the power of AiR has been expanded to provide stunning fidelity and control over other instrument tones and effects with 256 notes of polyphony.

In addition to Privias award winning grand piano sounds, the PX-5S has an arsenal of newly developed sounds including classic electric piano, harpsichord and clav sounds. Some of these tones are complete with release samples, amplifier and speaker simulations for an incredibly authentic experience.

The PX-5S is a powerful four zone controller, complete with 4 knobs and 6 sliders all of which are completely configurable to control internal sounds, effects parameters or send continuous controllers to other gear. Each zone on the PX-5S can control an internal sound, an external MIDI device or both simultaneously.

The PX-5S redefines what a stage piano should be, providing an arsenal of other sounds and creative tools. The PX-5S includes powerful Hex Layer tones complete with real-time filters and also features four programmable arpeggiators and multitrack phrase sequencing.

To easily access the sounds you need for your performance are Stage Settings. Each Stage Setting configures up to 4 keyboard zones, knob / slider assignments, phrases, arpeggios and effects settings. Each of the 4 zones in a Stage Setting can control an internal PX-5S tone, an external MIDI device or both simultaneously.

The PX-5S has 100 completely user configurable Stage Settings which are arranged in 10 banks of 10 each. When youre within a bank, each Stage Setting is just one button press away allowing you to seamlessly switch configurations during a live show. Stage Settings can easily be edited, moved or replaced using the PX-5Ss Data Manager software.

The PX-5S has an array of physical controllers available including Pitch and Modulation wheels, 4 knobs, 6 sliders and 2 footswitch inputs. The assignments of these controllers are configured separately in each Stage Setting. As an example, for an electric piano Stage Setting the knobs and sliders can be configured to control parameters such as amplifier gain, speaker selection, key-off noise, effects and EQ. In another Stage Setting with several sounds layered, the sliders could be configured to control volume over each zone or component.

Each knob, slider or pedal can simultaneously control two parameters at once, offering superior control over internal tones or external MIDI devices. In addition minimum and maximum values for these controllers can be set, allowing your adjustments to be precise and musical. You can specify if a Zone on the PX-5S responds to a physical controller or not

Pedal inputs on the PX-5S are also highly configurable and include Envelope Response. This allows an ordinary footswitch to control a parameter over time, allowing you to do volume swells, filter sweeps and control effects such as a wah-wah effect in an incredibly musical way. The pedal inputs on the PX-5S also auto-detect the polarity of the footswitch, allowing virtually any brand of footswitch to be used.

Hex Layers were originally introduced in the award winning XW-P1 synthesizer. Due to the power of the AiR sound source, PX-5S takes them several steps further. A Hex Layer is a single complex tone that can be made up of six sample layers. These can be stacked (layered), split or velocity switched. Each of those six layers gets its own filter (LP, HP, BP) and filter envelope, its own AMP envelope and pitch envelope (all 7 stage envelopes). You can even have layers that are triggered on key-release. A Hex Layer tone gets its own insert effect but you can choose if a layer uses that insert or the amount that goes to the system effects (chorus, delay, reverb). Best of all, the PX-5S can use two Hex Layer tones simultaneously.

The PX-5S includes two unique and highly configurable performance tools a Phrase Sequencer and an Arpeggiator. Each Zone within a Stage Setting on the PX-5S can choose to use an Arpeggiator or trigger a Phrase.

The Arpeggiator in the PX-5S is fully programmable. There are 100 presets and room for 100 of your own. There are up to 16 steps in the Arpeggiator and it can be configured to play at different note values such as 8th notes or 16th note triplets. Particularly unique to the PX-5S, the Arpeggiator can be used to trigger parameter changes such as panning, filters and more, with or without triggering notes, allowing you to add animation to your parts.

The PX-5S also includes 100 phrases with room for 900 of your own. Phrases can be riffs, drum patterns, controller movements or longer musical events that can be triggered live from the keyboard. Phrases can include things like bass lines and horn riffs that will transpose across a range of keys in the zone. Using the Data Manager software for the PX-5S you can convert standard .MID files for use as phrases. This gives you access to thousands of free and commercially available .MID files for use in the PX-5S.

Using a standard USB thumb drive, your performances or moments of inspiration can easily be captured as a standard .WAV file. Simply press the Audio Record button two times and the PX-5S is ready to record. Similarly, the PX-5S can play back .WAV files that are put on the USB drive. The second footswitch can be used to start or stop playback while you play along with your own pre-recorded backing tracks.

At 24 lbs., the PX-5S is the lightest weighted action stage piano ever built. This makes it easy to get to and from your performance. While youre at your performance you never need to worry about interruptions in power as the PX-5S can operate for hours with 8 standard AA batteries. So wherever you are the PX-5S is easy to travel with and be up and running in an instant.

Casio continues the tradition or providing "class compliant" USB connectivity on Privia digital pianos. This allows Privia to be used with Mac or Windows computers without the need for downloading drivers. Class Compliant USB MIDI also allows Privia digital pianos to be used as a controller for the Apple iPad by using Apples Camera Connection Kit.

We provide official warranty certificate for each CASIO musical instrument sold by us for you to assure you of a completely hassle free and worry free ownership experience.

Immediate purchase order handling and secure fast shipping is our commitment to our customer. All items will be shipped within 2-3 working days after we received the cleared payment notifications except for weekend or public holiday. We ship out all items by using Skynet and Poslaju courier service by default.

Delivery cut off time is 10am. Any payment made before 10am we will courier your item out on same working day. Otherwise will be courier out the next working day.

Please contact us if your item not received after 3 working days by email us at: [email protected] WhatsApp/Line/Viber/SMS: 017 221 1680

Credit card our preferred payment method for Local customer. Please provide the followingIMPORTANTinformations to us when you made your payment.

We offer variety of products include toys, Bicycle accessories, Musical accessories, collectible items and lots of the hot wanted products on marketplaces. We are working close with Local Courier Company so that we can offerFAST and SECURE Delivery serviceto our nationwide customer atvery attractive rates!

All the products we selling on local and international site are acquired fromlicensed local distributorand it is genuine from manufacturer. Some products are source directly from warehouse clearances sale that why we can offer such a low price compare to others. We are very concern about our product quality, because customer satisfaction is our top priority!

We also very concern about the product shipping packaging.Extra care protective packagingis what we practicing all the time, because we want you to receive your valued item in perfect conditions.

Finally we would like to thank you all customer for their kindly support, we appreciate your feedback and we always customer comment and criticism seriously. Your sincere feedback helps us to improve our services to serve you better in the future.

In this case we will ship all the in-stock products that you have ordered first and for products which are out of stock, we will ship it to you immediately once the next shipment of stock arrives or we will refund to you for those items out of stock.

The product was already out of stock when you made the order.

In this case we will ship all products in the order only when the new stock for the out of stock product arrives however, in some situations we might ship the products that are available first.

How To Buy
Shipping Information
Delivery

Immediate purchase order handling and secure fast shipping is our commitment to our customer. All items will be shipped within 2 days after we received the cleared payment notifications except for weekend or public holiday. This is because all Courier Company or pos never do any pick up during this period. We ship out all items by using Skynet and Poslaju courier service by default.

Delivery cut off time is daily 10am. Any payment made before 10am we will courier your item out on that working day. Otherwise will be courier out the next working day.

Please contact us if your item not received after 3 working days by email us at:[email protected] or whatapp/Line/Viber/SMS: 017 752 1080

We allow combine shipping if buyers purchase multiple items from us, by default additional RM3 for each subsequent item.